Can you believe I took 1700 photos in Egypt (Cairo & Luxor)? Is that normal? I’m a bit overwhelmed! I made a point to slow down and enjoy my journey – to pay attention, to absorb the experience, to listen to my guide, and not get caught up taking a million photos, yet I still returned with a catalog to sort through. I did pay attention though, I tried to keep up with the dynasties, the pharaohs, the old, middle, and new kingdom’s, the Egyptian gods, the tombs, temples, hieroglyphs, and so on.

Some photos deserve more than a glance on a small mobile screen. I’ll just make it easy on myself and start from the beginning, posting my favorites here with some background. I hope you’ll take time to read about the various sites I visited, because they’re fascinating, incredible, and beautiful! 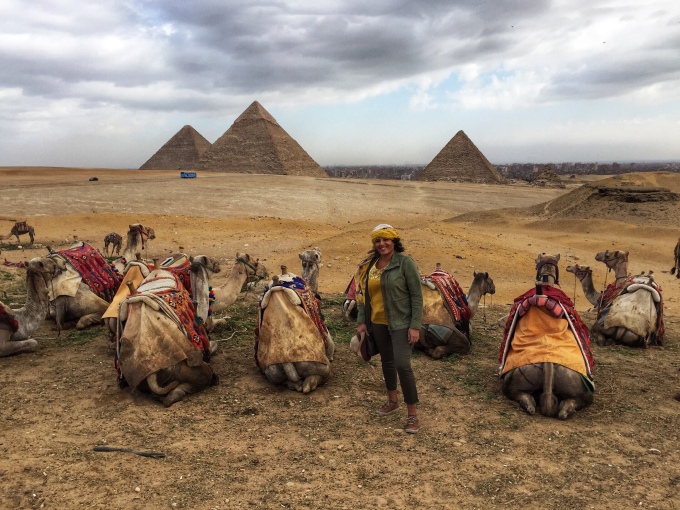 Let me add that I’ve never used a tour guide for an entire trip. I was a little hesitant because I’m a planner and I also enjoy free time to wander around on my own. A guide is definitely worth it in Egypt – between the language barrier, possible cultural barriers, and mere geography and history, it’s a lot to navigate. I used Djed Egypt Travel and I was very pleased. More on that later. For now, let’s just see some photos!

The Pyramids at Giza were built 4500 years ago to honor pharaohs and are located on the West Bank of the Nile River, across from Cairo. The complex consists of three large pyramids for Khufu (aka Cheops), Khafre, and Menkaure, and three smaller Queen’s Pyramids. Egypt’s pharaohs built pyramids to help usher them into the afterlife, where they would become gods. The pyramid was filled with their favorite items, anything they’d need to be comfortable for eternity, jewels, oils, etc.!

The largest pyramid belongs to Pharaoh Cheops and spans 481 feet (147 meters). Its 2.3 million stone blocks each weigh an average of 2.5 to 15 tons. According to my guide, one theory of how they were built involves a sled or pulley type system/contraption; and, they used the north flowing river to move the limestone blocks to Cairo. But really, who knows! The Cheops pyramid has three main chambers. It was interesting to learn that the pyramids were only opened, so to speak, a mere 150 years ago.

The pavilion below, behind the great pyramid, houses the Solar Boat – a 43 meter long cedar boat that was buried in a pit next to the pyramid, discovered in 1954 and reassembled. No photos inside. The theory is that it helped the pharaoh travel to the afterlife.

The Pyramid Age began in Saqqara, not far from Cairo, in the 27th century BC. It started with the step pyramid below, designed by architect Imhotep; the next design resulted in a #fail of the Bent Pyramid; then, they got it right with the Red Pyramid, which I ventured into, followed by the Khufu (Cheops) pyramid in Giza. 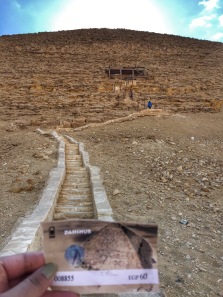 Venturing into a pyramid!

Upstairs to a small tomb area.

I’ve checked off camel ride at the Great Pyramids of Giza from my list. Camels seem lovely, but I prefer being on the ground. I thought to myself, don’t fall off a camel on your first day in Egypt! 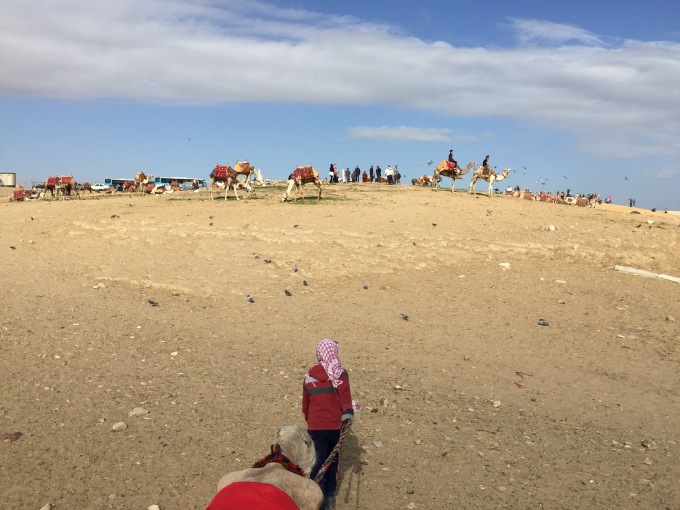 Okay, it wasn’t bad, he’s gentle, but I’m ready to get down. It’s definitely a spectacular panoramic view of the pyramids and the city in the background. Next stop, the Sphinx!!

This site uses Akismet to reduce spam. Learn how your comment data is processed.